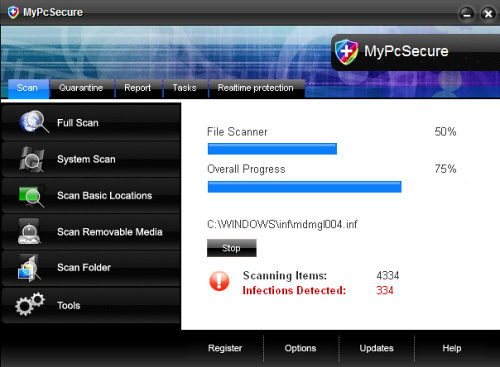 In fact, MyPcSecure (also called as My Pc Secure) is a rogue anti-spyware program which hails from the huge family of malwares called WiniSoft. MyPcSecure has numbers of clones where PCSecureNet, APcSecure and APcSafe are the latest of them. All these programs are dedicated to push trustful people into paying their money for the commercial version of MyPcSecure when such variant does not even exist. So be aware and don’t pay for this potentially unwanted application.

MyPcSecure is typically distributed by trojans horses that use security backdoors of the machine to be challenged and later start playing havoc there. They not only download all the data needed for the malware but also make the right changes in the System Registry. When a potential victim is attacked, as a result the corrupt trialware starts flooding computer with its annoying pop-up ads and system scanners. At this point, people are announced that there is something malicious going on and reported about hundreds of various infections found. MyPcSecure offers its “full” version for fixing everything. Additionally, startup system scanners are also displayed once the computer is loaded trying to scare MyPcSecure victims even more make them fall directly into purchasing the scam.

Keep in mind that MyPcSecure scanners and alerts are all fake and report absolutely imaginary infections that do not exist and have nothing to do with your machine. The malware even creates fake random files of its own and also reports them as infections. Don’t fall into brainwashing campaign of MyPcSecure because it seeks only to steal your money. Save your savings and delete MyPcSecure instead. Get rid of this scam without wasting your time.