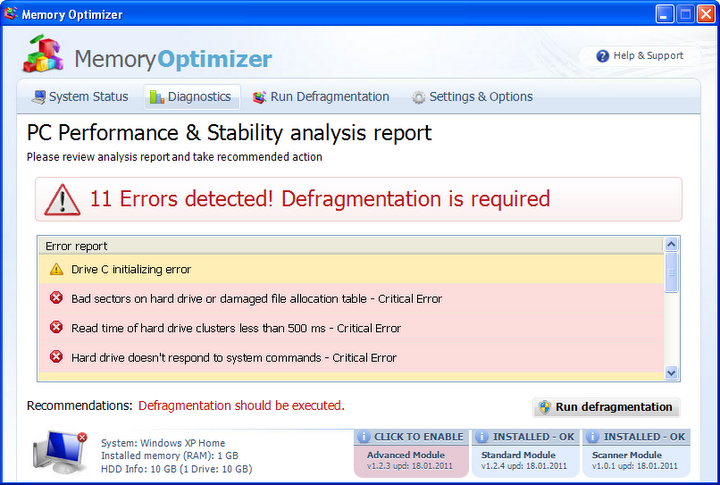 Memory Optimizer is a fake security product, so never fall into believing its analysis reports that are completely useless as they are invented by the same scam. This fake defragmenter will only seek to trick you into money stealing affair what means that it will do its best to convince you about paying for its fixing services. Don’t buy any “licensed” software of this scam because it’s just another variant of Disk Helper, Disk Optimizer, Good Memory or Fast Disk. You should simply remove MemoryOptimizer scam from your computer instead of sharing your money with scammers.

Deceptive tactics of Memory Optimizer virus are preceded by letting its trialware inside the PC. This secret infiltration can be easily accomplished with a help of Trojans once they find some security vulnerabilities on the targeted PC. Additionally, Memory Optimizer starts acting just like other fake defragmenters, so it will also interrupt into the browsing with fake hard drive error reports and deceptive scanners also reporting the same thing:

System Restore
The system has been restored after a critical error. Data integrity and hard drive integrity verification required.

Windows cannot find notepad.exe . Make sure you typed the name correctly, and then try again. To search for a file, click the Start button, and then click Search.

However, such trickery of Memory Optimizer is created for only making you scared about your PC and hard drive problems inside it. This fake optimization tool creates a need of trustworthy removal tool to get rid of these errors and then suggests trying the paid version of Memory Optimizer scam. At this point you should keep in mind that “licensed” its version will only deteriorate system performance and affect basic functionalities of your machine. You definitely don’t need this scam on your computer! Having been admitted to be just one fake hard disk defragmenter, Memory Optimizer should be removed from your machine ASAP.