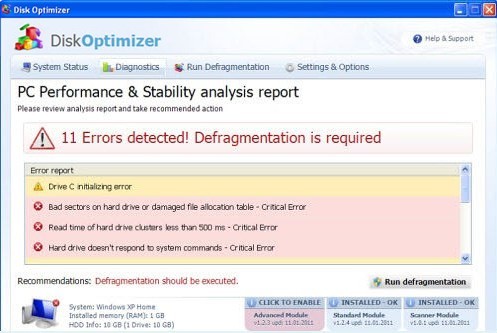 Disk Optimizer is a typical bogus defragmenter that tries to convince you about the hard disk errors detected. Don’t dream that DiskOptimizer will solve any of these issues reported even if you pay for the licensed its version. Just like Good Memory, Fast Disk or Disk OK this malware seeks only to get your money by tricking into thinking that it is a powerful defragmenter and then may even let more viruses inside your machine. Normally, Disk Optimizer relies on Trojans viruses when tries to get on board undetected that may come together with malicious updates or fake video codecs, so be aware when updating something.

The penetration of Disk Optimizer virus mostly stays undetected, just like the additional actions of setting it to start after every computer’s reboot. When launched, scamware will additionally start its brainwashing campaign involving fake alerts telling that there have been critical hard drive errors detected. You should remember that just like the same malware, these problems are useless:

System Restore
The system has been restored after a critical error. Data integrity and hard drive integrity verification required.

Windows cannot find notepad.exe . Make sure you typed the name correctly, and then try again. To search for a file, click the Start button, and then click Search.

Users infected with Disk Optimizer will also see bogus scans that will wrongfully alert about the same problems of hard disk. Declaring the same bored information, they will also try to convince you about the need of DiskOptimizer. Never think so! In the meanwhile, your computer probably has nothing dangerous, but the same malware Disk Optimizer. To make this virus gone, remove Disk Optimizer virus because the registered version will be still aggressively advertised through its misleading popups.

For a removal, you may need running a reputable anti-spyware, like spyhunter or Malwarebytes Anti-Malware. If you find yourself disabled from launching these anti-spywares, use this code of registration to disable this or any other fake system defragmenter: 0973467457475070215340537432225 .