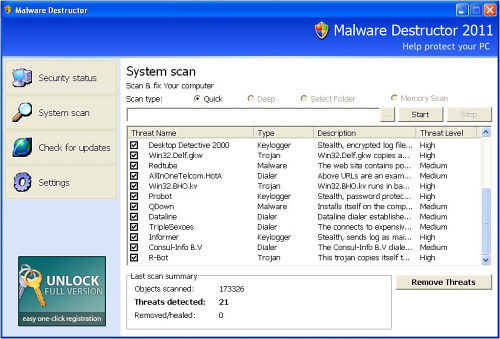 Malware Destructor 2011 is a rogue anti-spyware application that is identical to Paladin Antivirus and Antimalware Doctor malwares that all pose to be perfectly legitimate and worth being registered. However, they should be avoided and removed as soon as they appear on your computer’s desktop.

The way how Malware Destructor 2011 gets on your PC is very simple: it is promoted on web pop-ups that offer to run a free online computer scan. Just after clicking, people are brought to malicious domain that shows an advertisement of online anti-malware scanner and then prompts them to download Malware Destructor’s 2011 free version. Users are simply tricked into believing that their computers are infected but this free “anti-spyware” will save them.

Just after manual installation, people are also foolishly offered to install fake Updates. Trojan, mostly named KBI1883574, launches and victims additionally start getting a window pretending to be an update from Microsoft. This alert, which appears everytime computer boots up and tries to convince you that Malware Destructor 2011 is recommended by Microsoft, looks like that: