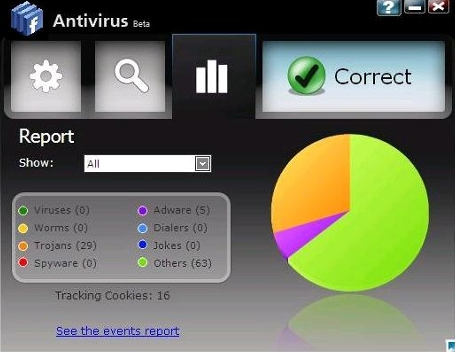 Facebook Antivirus (also called as f Antivirus Beta) is fake security software which has been actively promoted on Facebook these days. Do NOT install Facebook antivirus because it reports only invented problems related with your security or privacy. Besides, do NOT mix it with Panda Cloud Antivirus because scammers have clearly ripped graphical user interface from this well known and legitimate software. Please note that Facebook Antivirus is active only on Facebook and it’s not a virus, so if you haven’t downloaded anything malicious from it and haven’t clicked on anything connected with Facebook Antiviurs your computer is clean.

The activity of this rogue application begins with warnings of malicious Facebook application called Antivirus in Facebook. Don’t click on them because your profile will be infected at once. Additionally, this rogue program tags your photos with 20 of your friends and then publishes the photo to your Wall. Then your friends receive update notifications that are malicious ones, of course.
If you have been tagged in the photo by the rogueware automatically, you can remove the Tag. Here’s the way how to remove a Tag from a photo:

1. Open your photos
2. Click the tagged picture
3. Look for your name in the list of people tagged
4. Click the “Remove Tag” link that appears beside your name

In fact, if you have been scammed by Facebook Antivirus you should download trustworthy anti-spyware program and scan your PC. Download an automatic removal tool below and clean your computer.