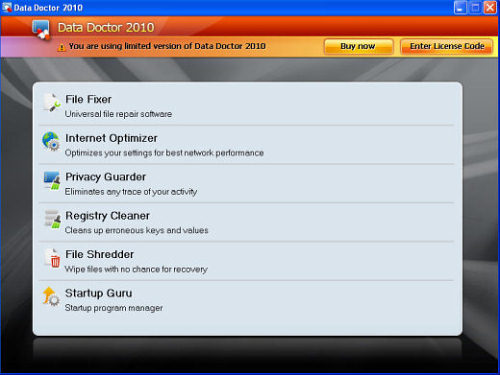 DataDoctor 2010 (or Data Doctor 2010) is a just one more rogue anti-spyware application which is distributed on the Internet as a reputable PC optimization tool. PC users are usually tricked by its fake pop-up ads that recommend installing DataDoctor2010 for absolutely free. However, after some time victims recognize that this program classically loads fake Registry scanners and reports fabricated system errors trying to create wrong impression that machine has lots of system errors.

After convincing users to install it without any payment, DataDoctor 2010 will produce only misleading pop-up ads about the need of deleting “infected” files. The program claims that Windows Registry will be back to normal and Operating System will become faster only after junk files are eliminated. Of course, DataDoctor 2010 will show you even more pop-up ads about the problems detected and will announce that only its paid version will fix everything. Don’t fall into its tricks. Data Doctor 2010 is not capable to do anything useful and wants only to steal your money. Before you pay for this malware, scan your computer with a reputable anti-spyware at first. Remove Data Doctor 2010 before it damages your computer.