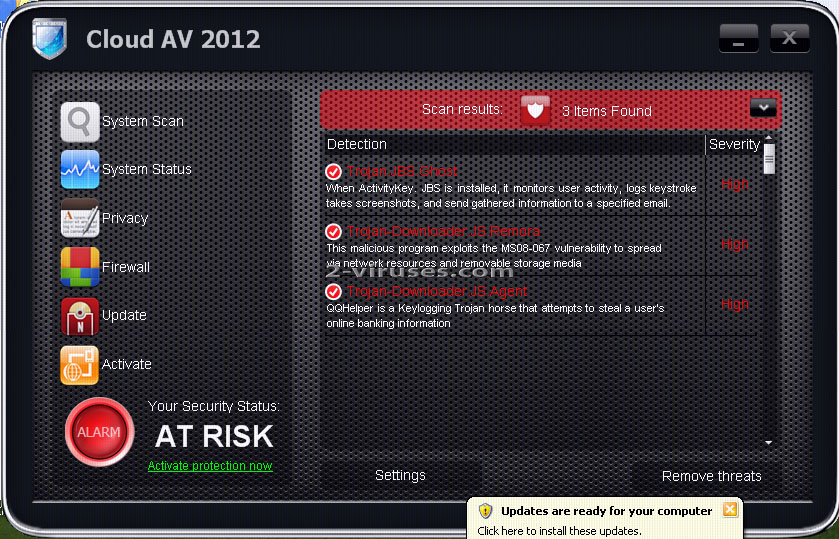 Cloud AV 2012 is a fake antivirus program from the same family as AV Protection 2011 and Open Cloud Antivirus. The rogue is distributed through infected websites, spam emails or faked “free” applications. After execution, the trojan downloader will install Cloud AV 2012 and it will start causing havoc on your PC.
The first signs of Cloud AV 2012 infection are multiple alerts from the system tray and popups. They will claim that each program you execute are infected. In majority of cases Cloud AV 2012 will prevent legitimate programs from starting. These alerts look like this :

To help protect your computer, Windows Firewall has blocked some features of this program.

Do you want to keep blocking this program?

Windows has found spyware infection on your computer!

Unwanted software (malware) or tracking cookies have been found during last scan. It is highly recommended to remove it from your computer.

Keylogger Zeus was detected and put in quarantine.

Keylogger Zeus is a very dangerous software used by criminals to steal personal data such as credit card information, access to banking accounts, passwords to social networks and e-mails.

You can ignore these alerts, but Cloud AV executable will try other tricks to convince you that your PC is infected. For example, it will show various messages about spam emails sent to your contacts and so on. Thus many of the users will run a system scan with Cloud AV 2012 and will get more false results. False results and lack of real antivirus engine rates this program as Rogue antivirus, which should be removed. Never pay for Cloud AV 2012. This would fund future rogue development and problems for you and other users.