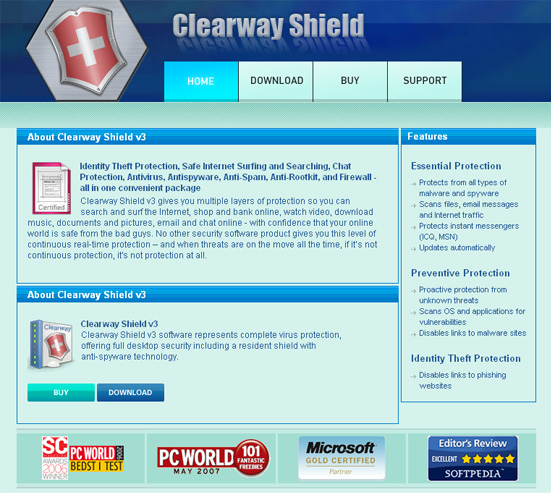 Clearway Shield is a rogue anti-spyware program, which costs $25 (not Monopoly money either), and gives nothing in return. Like most other rogues, Clearway Shield typically uses trojans to enter the system, and relies on misleading advertising to trick users into purchasing it’s so-called “licensed version”.

Once installed on the system, Clearway Shield displays popups and fake system notifications to mislead the users on the state of their system security, claiming it is infected by various parasites, and thus urging to download Clearway Shield in order to take care of the issue. This parasite also performs fake system scans, which mark legitimate files as threats, and create the illusion that the user’s system is infected. This information is false, or, at the very least, baseless, because Clearway Shield has neither the ability to detect nor remove parasites.

There is no good reason to have this program on your system – it will only make your system slow, block legitimate security software, and disable some system services. Remove Clearway Shield as soon as possible.