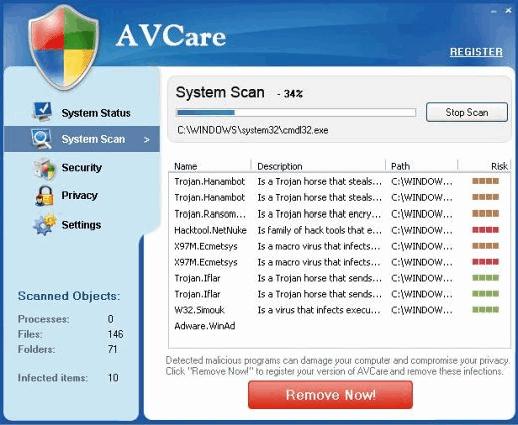 AVCare, also known as AntivirusCare, is a rogue anti-spyware program, it functions much the same as every other rogue. It usually infects the system by using trojans, such as Vundo, but has also been known to be manually downloaded and installed after seeing a simulated online scan on a website that pimps AVCare. This parasite relies on misleading advertising to trick users into purchasing it’s “licensed version”.

Upon entering the system, AVCare floods the user with popups and fake system notifications, supposedly to inform him of an infection or multiple infections present on the system. This information may coincidentally be true, but AVCare has no way of knowing that, being the non-functional parasite that it is. In addition to the popups, AVCare performs fake system scans, which produce greatly exaggerated or altogether false results, oftentimes containing false positives (legitimate files marked as threats). As if all of this is not enough, having AVCare on the system is bound to result in a significant drop in system performance.

AVCare is a threat and should be treated as such: do NOT download or buy it and block it’s homepage using your HOSTS file.