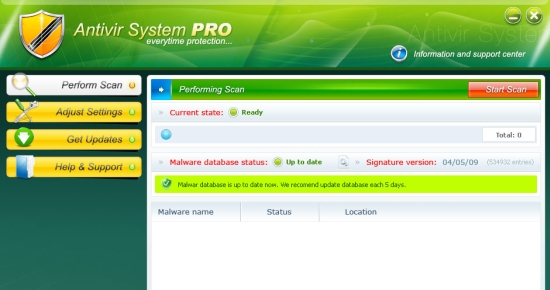 Antivir System PRO is a fake anti-virus program, designed by scammers to capitalize on inexpierienced users. This parasite uses the Zlob trojan to enter the system, this is done by disguising the trojan as a video activeX codec. Antivir System PRO relies on misleading advertising to trick users into purchasing it’s “licensed version”, which is no more functional than the so-called “trial”.

Once inside and active, Antivir System PRO will flood the user with popups and fake system notifications, supposedly to inform him of an infection or multiple infections present on the system. While this information may indeed be true, Antivir System PRO has neither the ability to detect nor remove any of the threats, and should therefore be ignored. Like pretty much any other rogue program, Antivir System PRO will perform fake system scans, which produce greatly exaggerated results, oftentimes including false positives. As if that’s not enough, this parasite will hijack the browser and significantly decrease system performance.

Antivir System PRO is a scam and should be treated as such: do NOT download or buy it and block it’s homepage using your HOSTS file.