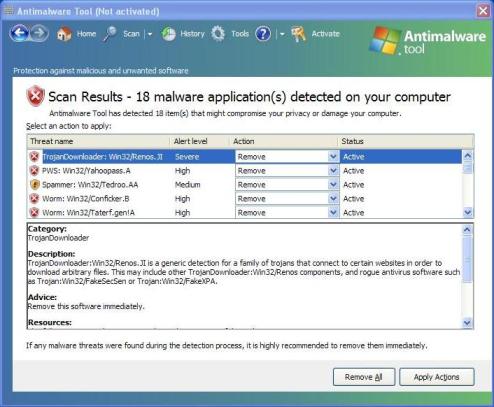 Antimalware Tool is not that program which should be trusted, because it looks and acts just like Internet Defender or Antimalware defender viruses! This is one of rogue anti-spywares that seek to rip users off but have no capabilities to detect and remove malware. While it runs on the targeted system, AntimalwareTool starts imitating system scanners and then reports tons of viruses. Most of our users asked about such rogue and their misleading activity have admitted that they had been tricked by such alerts. Be sure that you are not one of them and ignore anything reported by Antimalware Tool and offered to purchase. Though Antimalware Tool may look like a trustworthy program, you must run legitimate security program to make sure that these detections are real. However, it can be easily predetermined that only Antimalware Tool will be detected and offered to remove. However, sometimes its elimination becomes complicated, so reboot machine into Safe Mode with networking first and also try to kill its randomly named processes. Our security experts also recommend installing spyhunter licensed version for fixing your PC and uninstalling Antimalware Tool.

Antimalware Tool is propagated through backdoor Trojans or insecure downloads presented as video codecs required for watching something online. It’s not recommended visiting websites with adult content because instead of real video codecs you will definitely install some trojans. This intrusion is followed by secret modifications that make this scamware launched as soon as your computer becomes actively working. So, instead of normal functions you get from your computer, you will keep getting multiple alerts and scanners trying to make you scared. They all report for example ‘18 malware application(s) detected on your computer’, such as Trojans, worms, spyware:

Antimalware Tool
Spyware.IEMonster process is found. The virus is going to send your passwords from Internet browser (Explorer, Mozilla Firefox, Outlook & others) to the third-parties. Click here for further protection of your data with Antimalware Tool.

Antimalware Tool
Your system has come under attack of harmful software. Click here to deactivate it.

Antimalware Tool
External software tries to control variety of your system files. This may lead to breaking of some data in your system. Click here to protect remote access to your PC & delete these programs.

1. Reboot your computer into ‘Safe Mode with networking’

2. Download process explorer from this location: https://www.2-viruses.com/wp-content/uploads/PE/eXplorer.exe and kill all the randomly named processes. Launch process explorer and make sure you can see folder of each process. Stop Antimalware Tool processes.

3. Now you should download spyhunter. Don’t forget updating before you run a full system scan. This should remove all the files detected.