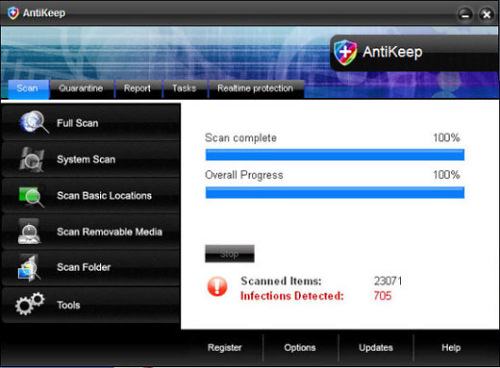 AntiKeep may look like a legitimate application but in reality it’s just one more rogue anti-spyware, released at the of November. This rogue can be attached to WiniGuard family of malwares. It behaves and uses the same Graphical User Interface (GUI) just like AntiAdd, REAnti, RESpyWare or Secure Keeper. It is a total scam which seeks only to make users buy the license key, so please do not believe information reported by this software.

AntiKeep is usually distributed by Trojans viruses. Once inside the targeted system, they download additional files and install the program. After settling down, AntiKeep trends to load fake system scanners when Windows boots up and gives the information about hundreds of various spyware detected. It concentrates only into making PC users scared about their machines security and for increasing the image uses pop-up ads, system tray notifications, fabricated reports and alerts.

However, the truth is that AntiKeep tries to sell its so called “licensed” version as a legitimate removal tool. Infections reported by this malware are invented by the same AntiKeep because it trends to create random files inside the system when breaks into. Delete AntiKeep immediately after detection because otherwise it will annoy you to death by loading tons of its fake security reports. Use the removal guide written below to delete AntiKeep for free.