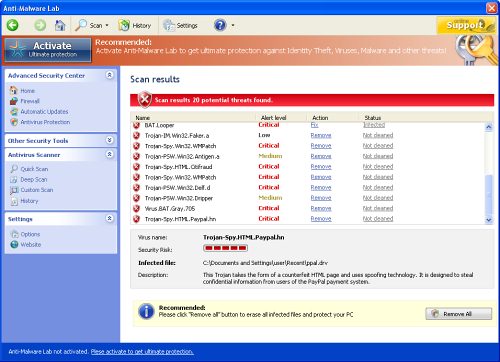 Anti-Malware Lab is a fake antivirus program that was recently detected infecting random computer systems. It is a predecessor of infamous Internet Security Essentials, My Security Shield, My Security Engine rogue antiviruses. The infiltration of Anti-Malware Lab is based on Trojan viruses meaning that it is completely impossible to stop this badware at the stage of its infiltration.

Anti-Malware Lab uses the same techniques as other rogue programs. It creates an illusion that your system is at risk, suffering from a bunch of system infections. The program causes a flood of pop up ads and alerts in the system providing contrived information, such as harmful software has been detected on your machine. Scanners of Anti-Malware Lab make the situation look even worse. They are launched constantly without wish or permission of the user. Running for a few minutes a scanner of Anti-Malware Lab concludes that your system is at risk. Basically it displays a list of files supposedly harming your system. Have in mind that these files probably do not even exist on your system. Even if they do, they are completely harmless.

If you wonder why this show is created on random computer systems, the answer is very simply. Each such campaign is followed by an offer to purchase a full version of Anti-Malware Lab. The program attempts to prove that this is the only way to solve security issues that appeared on your machine. However, the actual problem is far away from this version. Once facing this scareware on your computer you should only think about removing Anti-Malware Lab from your computer as soon as possible. The easiest way to do that is by running a full system scan with spyhunter or Malwarebytes Antimalware. Running an upgraded version of a reputable antispyware will also guarantee that your system will be protected against this kind of attacks in future.

To activate product key, use this registry code : U2FD-S2LA-H4KA-UEPB

One response to “Anti-Malware Lab”