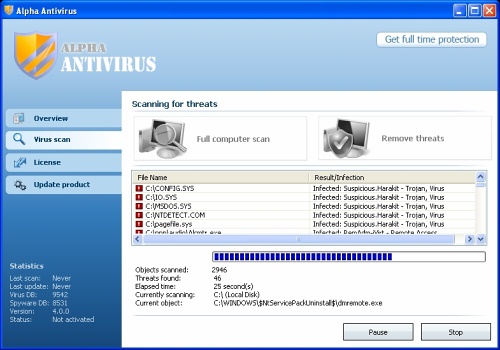 Alpha Antivirus is a rogue anti-spyware which hails from the same malware family as the infamous Personal Antivirus. Alpha Antivirus uses a similar design to that of it’s brother, as well as the same “traditional” ways of spreading – these mainly involve the use of trojans, such as Vundo, or devices of deception, like browser hijackers.

Alpha Antivirus is installed on the PC without any notification or consent from the user. The program makes some system modifications and drops executable files. Consequently, the compromised computer is bombarded with annoying security alerts, which hold no truth whatsoever. Alpha Antivirus scans the system and declares to have found rootkits, trojans, worms and other badware and recommends to download and install the paid version for removal of these threats. In reality, this application has no ability to detect or remove any threats. All the alerts are fabricated and only used in order to scam users into purchasing Alpha Antivirus.

Don’t increase the profit of it’s creators and remove Alpha Antivirus as soon as possible!