Advanced System Protector is an old antivirus application that was legitimate for very long. It is made by Systweak at the moment. However, we discovered that it is distributed using heavy rogue tactics at the moment, together with other malware. Although the software does not report false infections (yet it is quite poor in detection anyway) its promotion methods are too aggressive to be tolerated. Such applications that do no good but are advertised to seem efficient are one of the main reasons why people should have serious trust issues. If you feel like your device is not running smoothly, utilize programs that have proven themselves to be highly regarded.

Firstly, Advanced System Protector is installed silently on the launch of Regclean Pro – other software by the same makers. You are not asked for a confirmation of any sort. A silent antivirus or anti-malware program install is a rogue distribution tactics number 1. For further installation processes, please pick advanced/custom modes so no additional content would be allowed to start residing in your device. If you notice that the application is offering to make bizarre changes, do not install such software in general as it might make modifications that are not corresponding with your needs and interests.

Secondly, Advanced System Protector detects other software that comes together with Regclean Pro from the same installation bundle. So technically, its advertisers infect PC with a browser hijacker first, and then install software to remove parts of it later on. This is a rogue distribution tactics number 2. Basically, Advanced System Protector creates a problem and then wishes to be a hero by offering a solution to it. This is not a technique that should be selected by reliable technicians: it sounds like something that shady programmers would do. 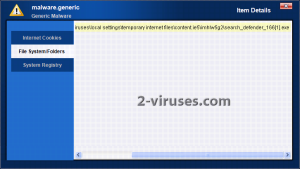 Thirdly, the bundle with which Regclean Pro is distributed is a Trojan itself – it does not perform what it advertises and is a form of malware that installs various offers on your PC. Trojans are dangerous as they can cause severe setbacks in your system.

Thus I strongly suggest NOT to use Advanced System Protector at the moment and uninstalling it from your PC. Such distribution tactics should not be encouraged. We first noticed this questionable application back in 2013. However, it has been bothering users in 2012 as well. Now in 2016, we are not sure whether this doubtful security software is still being actively distributed. If you happen to be infected with it, we recommend scanning your PC with legitimate anti-malware programs. You will need to detect all the hijackers and trojans that distribute or are distributed together with Regclean Pro and Advanced System Protector.  Go for Spyhunter, Malwarebytes Anti-Malware, [Hitman]. 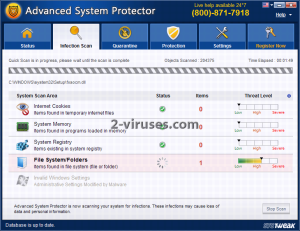 A full video of our tests is available here :