‘Your Windows Hasbeen Banned’, also referred to as ‘Your Windows Has Been Banned’, is a relatively new screen locker, which appeared in November, 2016 (the first version). ‘Your Windows Hasbeen Banned’ is, actually, the first version of the screenlocker, while ‘Your Windows Has Been Banned’ is the second version (appeared on the 13th of December, 2016). They are practically identical, just the second version has the typing mistake in its title corrected and it encloses the concrete contact details for support. It is a trojan type of viral infection, since the user of the infected computer is falsely informed that ‘unusual activity’ has been detected on his device and he should, accordingly, contact the nearest Microsoft Technician to solve the security issue. While, in fact, it is a technical support scam on the other hand, just the one, which locks the screen.

What You Need to Know About ‘Your Windows Hasbeen Banned’ Screenlocker

‘Your Windows Hasbeen Banned’ trojan can be distributed in a number of ways. No specific manner of its distribution has been identified yet. The most probable channels of ‘Your Windows Hasbeen Banned’ screen locker’s distribution are vulnerabilities in the software of the compromised system and free software downloads. Once the malicious program gets downloaded on the computer, it locks the screen, blocking the user’s access to the machine and displaying the following window (the first and the second versions in a respective order): 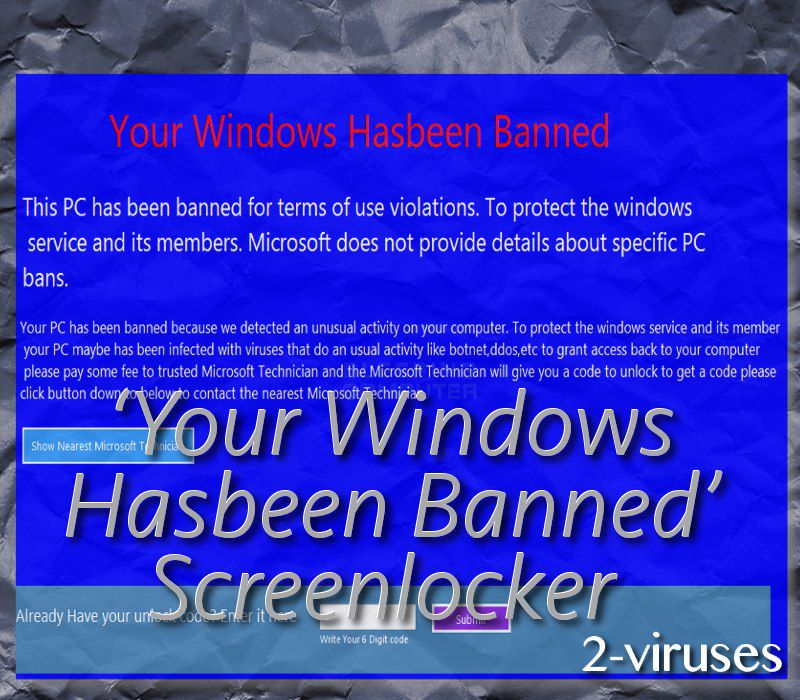 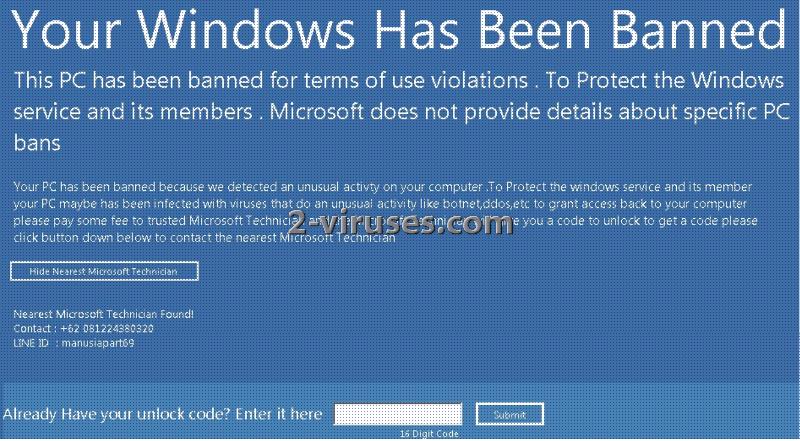 The text of the window:

This PC has been banned for terms of use violations. To protect the windows service and its members. Microsoft does not provide details about specific PC bans.

Users should analyze the security warnings they receive with scrutiny and assess them critically. As if the alert received is a fake one, in most of the cases this is rather clear from the message received itself to understand whether your PC suffers from some kind of virus or its system undergoes real security issues.

Let’s look at the above posted warning message, rendered by ‘Your Windows Hasbeen Banned virus’. Even the title contains the typing mistake. In the next sentence of the body of the notification ‘windows’ is written in the lower case, the same is done and in the following part of the text. Typing mistakes by skipping spaces persist. The particular case of the issue is ‘explained’ in a very obscure manner. Moreover, it is practically improbable that Microsoft or any other reputable software developer would offer you various unlock codes to solve security breaches. Besides, the text is full of syntax mistakes as well. No such reputable company as Microsoft would let itself to provide you with such a note.

Thanks for buying the unlock code from me! You are fooled i am not microsoft To Remove My Virus Follow the Instructions 1) Enter “123456” as a Unlock Code 2) Open Start Menu 3) Go to Start Up 4) Delete the exe file “AdvancedRansomware1.exe”

The screen can also get unlocked by pressing the combination of Alt+F4 on the keyboard. When the user gets access to his computer, the screenlocker needs to be removed. Download and run Spyhunter or Hitman to have ‘Your Windows Hasbeen Banned’ program removed from your PC.

You need to take care of your computer’s system. Do not miss software updates and do not install free apps in the Default settings but choose the Advanced or Custom ones to pick the malicious apps out. Because the installers of free applications are typically malware-laden.