“You are using an older version of Chrome” pop-up message is not a valid notification. It urges users to update their Google Chrome browser to the latest version, but in reality, the update might be a malicious file. Pop-ups that warn people of their out-dated programs are almost always fake. We have written articles about many rogue update notifications like “Outdated browser detected”, “Outdated java plugin detected” or the notorious Adobe Flash Player updates. None of these suggestions are worth your while as they all will infect you with harmful computer viruses.

Security researchers are constantly warning the Internet community of these rogue messages, but a lot of people fail to listen. For instance, fake update messages have been associated with Wateting Hole attack (Fake Flash Player Update Linked to Watering Hole Attack on Popular Middle East News Site). In addition to that, specialists have reported that these fake messages were also used to distribute Kovter malware. Considering this, you should not click on the “You are using an older version of Chrome” scam. You might become a victim of a cyber attack, leading to the theft of your personal information or a ransomware, Trojan infection. 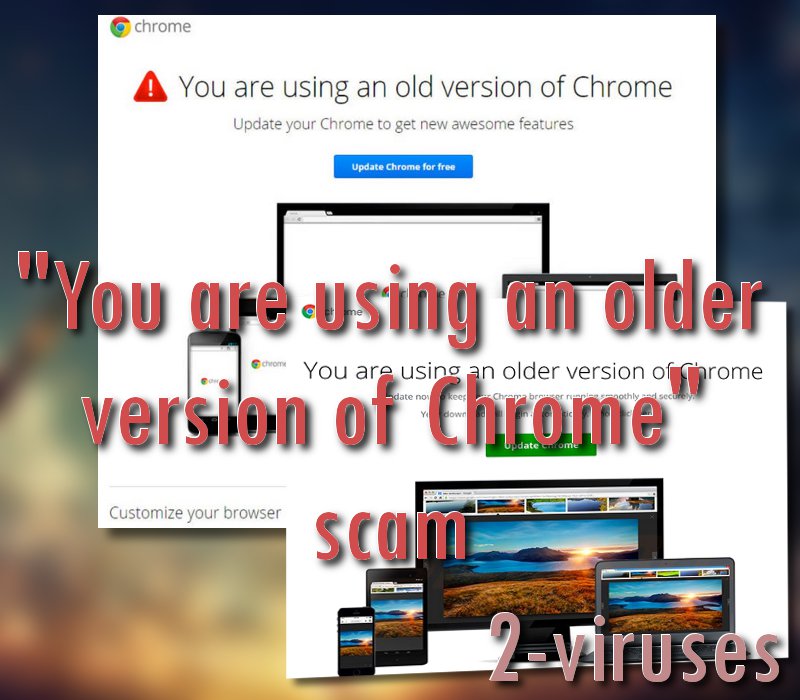 StopMalvertising campaign frequently detects new scams, aimed at Internet surfers. However, hackers still manage to serve a lot of unreliable content on the Web (Malicious ads lead to fake browser updates). Becoming exposed to messages like “You are using an older version of Chrome” scam is very easy: all you have to do is visit a rogue website. Many people have reported such deceptive notifications. All of them are puzzled: the websites, offering the update, look somewhat legitimate, but not quite. This is because hackers attempt to create rogue domains that look similar to the official websites of specific program-owners. In this case, you might be introduced with a site that looks very similar to the legitimate Google Chrome page.

Nevertheless, do not be tricked: download updates from legitimate sources. If you encounter this “You are using an older version of Chrome” pop-up, remember to check one tiny detail: whether your browser is actually out-dated. This can be easily checked. In most cases, it might be that the Google Chrome will turn out to be working on the latest version. However, not all people are so attentive to details. As a result, they can become infected with various types of malicious viruses. For instance, they could install banking Trojans, hoping to steal their banking account details and later, wipe them clean (The continuous threat of malware hiding in fake Adobe Flash updates). As there are no ways of completely avoiding messages like “You are using an older version of Chrome” scam, we hope that you will be careful.

Is there any way to avoid “You are using an older version of Chrome” scam?

First of all, keep your operating system malware-free. Do not download potentially malicious freeware programs, especially if they are offered to you in unreliable file-sharing sites. Peer-to-peer downloads have also been noticed to generate a lot of problems to users. In addition to that, stop visiting websites that provide illegal services. Many online-streaming domains offer content which is not to be distributed without a license. In such pages, you might encounter a massive amount of objectionable online advertisements. One of them might be the “You are using an older version of Chrome” scam.

We have no doubt that you are eager to stop this “You are using an older version of Chrome” scam from ever appearing on your screen. It is possible that you have recently installed a tool from suspicious sources. The program could be the reason behind this deceptive browser update. If you do remember installing such software, please get rid of it thru Control Panel. However, if the situation is more complicated than that, we offer you an alternative. Run a scan with Spyhunter which will make sure that your browsing experience and computer device will be protected from hackers.