Inside of the free software bundles you can actually find the whole bucket of cyber bugaboos, starting from all kinds of adwares and ending with crypto-malwares, asking for ransom payments. You can also find there viruses, named as screen lockers. This type of malware, as the title indicates, locks the screen of the compromised computer, in such a manner preventing its user from accessing his device. Thus, a screen locker’s infiltration is a true trojan infection. The latter type of viruses can also be added as attachments to spam e-mails of various enticing themes. Screen lockers bear resemblance to ransomware viruses, as they tend to claim that the files on the system have been deleted. However, the majority of them do not have the actual functionality of data encryption or deletion embedded in. One of the most recent screen lockers detected is the screen locker, which was given the name of Padlock.

Some Facts About Padlock Screen Locker

Padlock screen-locking malware is a simple screen locker infection, which does not result in the encryption or deletion of the data, stored on the system. Padlock is a malicious program, which has only one malicious feature, that of the locking of the screen of the affected system. Even though the inscription on the lock screen conveys a completely different message: 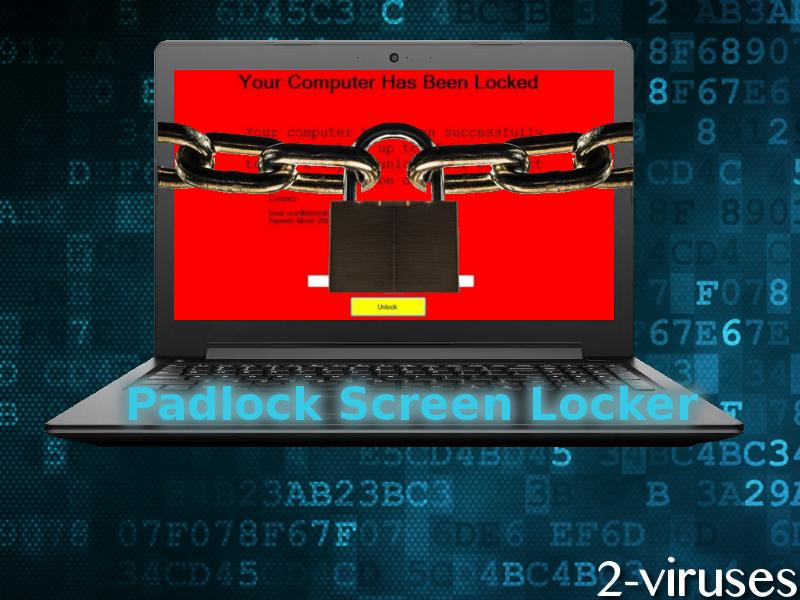 The text of the message is:

YOUR FILES HAVE BEEN DELETED & YOUR PC HAS BEEN LOCKED!!!

The note left by the cyber crooks makes you believe that you have actually encountered some form of a ransomware, which has a screen-locking feature. While, in reality, it is vice versa – you are dealing with a screen locker which tries to pretend a form of ransomware infection. When you have been introduced with the above presented screen, it is, actually, pretty simple to unlock the screen. The actual code, which should be entered into the tiny white field in the bottom left corner of the screen is ajVr/GRJz0R. The code has been extracted from the executable file of the Padlock screen locker. And it does really work. However, if, for some reason, it does not work, for instance, if the virus has been updated and you have come across with its new version, you can easily remove Padlock malware regardless. To bypass the entering of the unlock code and, thus, unlocking the screen, you can use a worn-out trick, which is the rebooting of the computer in the Safe Mode. The malicious application will not disappear from the system in the latter manner, however, once you have restarted your PC in the latter mode, the program will not be able to lock the screen, thus, you will be able to remove the malware without much effort.

How to Remove Padlock Screen Locker?

Padlock screen locker can be removed with the application of either Spyhunter or Malwarebytes antivirus programs. It is highly unlikely that Padlock would attempt to hinder the installation of either of the latter anti-malware apps on the system or prevent them from running. The more so, if you have made use of the second option to have your computer’s screen unlocked and rebooted your PC in the safe mode. If you click on either of the anti-spyware app recommended, you will be guided to download the full version, which means that by downloading the program, you will, actually, install the full package security software on your computer’s system, which will protect it from multiple cyber threats in the future and will make sure that your device would not suffer from a variety of viral infections. In conclusion, we would like to note that Padlock screen locker can also be downloaded on the systems after the exploitation of the vulnerable software, thus, make sure to keep away from pirated software and don’t miss reliable updates.