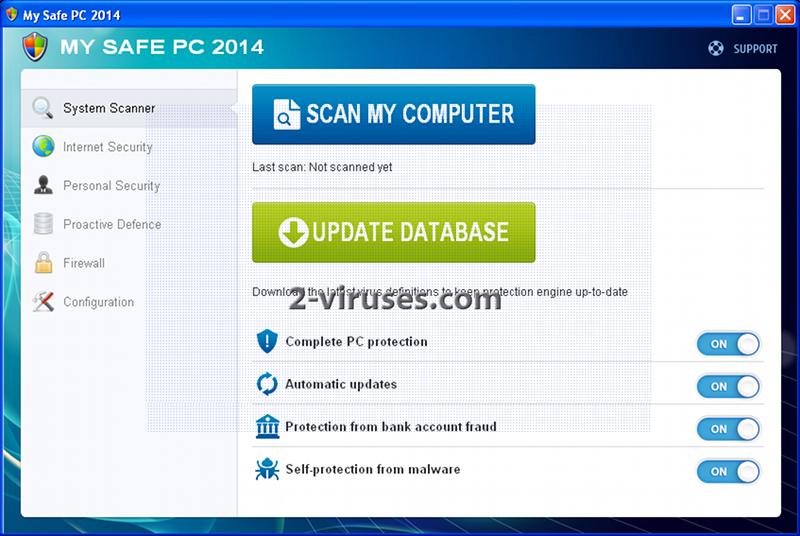 My Safe PC 2014 is a rogue antivirus program that infects random computer systems in order to make money. The malware is distributed using Trojan viruses and it belongs to the same family of rogues like PC Defender 360. The program imitates all actions of an antivirus tool and tries to convince computer users into purchasing its full version.

Once inside the computer, My Safe PC 2014 runs a system scan which actually only simulates looking for threats. The scan is run without users’ permission and it is not possible to stop it. After a couple of minutes, the program claims that it detected a bunch of threats on your computer and to remove them you will have to activate a full version of My Safe PC 2014. There is no surprise that the complete version of a fake tool is a paid one.

If you try to run any other program on your computer, for example some of your security applications, it will be closed automatically saying that the program is infected. Basically, My Safe PC 2014 hijacks the .exe extension on your system which means you will not be able to run any of your programs. What is more, the fake antivirus constantly displays various security notification warning that your system is infected and your private data is at risk. All of the warnings recommend getting a full version of My Safe PC 2014. Here are some of the security notifications you may receive:

My Safe PC 2014 Firewall Alert
notepad.exe is infected with Trojan-GameThief.Win32.Nilage.ipj Private data can be stolen by third parties, including credit card details and passwords.

Security Alert
Vulnerabilities Found
Background scan for security breaches has been finished. Serious problems have been detected. Safeguard your system against exploits, malware and viruses right now by activating Proactive Defence.
Upgrade to full version of My Safe PC 2014 software package now! Clean your system and ward off new attacks against your system integrity and sensitive data. FREE daily updates and online protection from web-based intrusions are already in the bundle.

It is strongly recommended to remove My Safe PC 2014 as soon as you detect it on your computer. As it doesn’t allow running any of your computer protections tools, you will not be able to scan your system with a legitimate antispyware tool that easily.  If you have other user account available, run antimalware scan, e.g. Spyhunter after logging to it. If you can run a full system scan, the malware can be removed. This is a very good reason to keep a separate administrator account that is used for such situations only. If this fails, follow the instructions below.

S!Ri has provided a serial code that you can try using to fake-register My Safe PC 2014 and then try to remove this rogue manually. Here is the code:  xOxZxLxWxIxTxFxQxCxNxYxKxVxHxSxE.