In a way, MegaBackup fosters a service that we go on and on about. In every article about ransomware viruses, we try to attract your attention to the necessity of keeping your valuable data in secure places. One of the possibilities is to keep it in backup storages that protect software from getting tainted. Even though MegaBackup is a legitimate program, it has some flaws that should be addressed by its creators. One of such is the fact that this program has been noticed to spread via bundles of programs. However, the application received in such way won’t be as functional as you would hope. It probably won’t allow you to store your files (since there is a fee for such luxury) but instead, it will simply produce windows, suggesting that your files are in desperate need of protection. Even though MegaBackup might be of an excellent assistance, this sneaky method to convince people to get it is rather twisted. We should emphasize the fact that this facility is not malicious, but its infiltration into devices is of a questionable repute.

After infiltrating into users’ devices, the application is presumably to make modifications to users’ Windows Registry Key. This application needs to run together with other software after every time the computer is restarted and adjusted for a new day. During the existence of MegaBackup in your device, you will be be randomly introduced to windows. They will most frequently inform you that a specific amount of files can easily be put to risk. A large number of unprotected files indicates that your personal data is under high risk from potential system crash, accidental file deletion or hard drive damage. These statements are actually quite right, but using tactics, similar to scareware, for the sake of being chosen for utilization is not a respectable act. 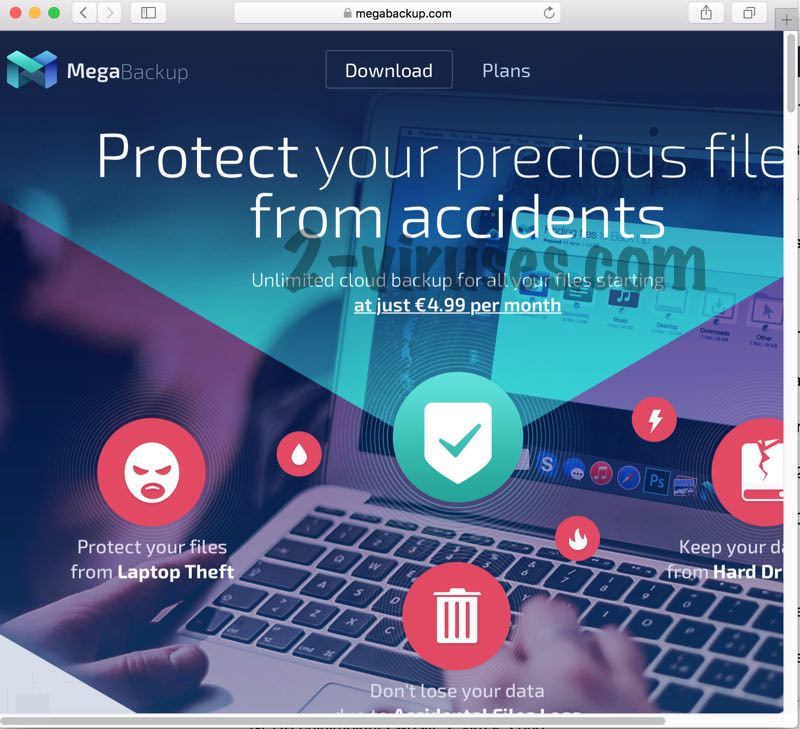 As we have mentioned, MegaBackup is a legitimate service, available for Internet users. Nevertheless, there are various aspects that raise questions. In its Terms of Usage document, we noticed that the company clearly indicates a possibility of external links and other third-party content, incorporated into the service of this app. We have no knowledge of this facility spreading misleading promotions, but there is always a possibility. If you choose to store your files in MegaBackup storage, please be thorough with its terms and policies. For now, only people using Windows OS and Mac OS X are invited to exploit the advantages of this facility. On the other hand, for some its persistent nature is a negative point for this application. The official page of MegaBackup can be seen above this paragraph. The window that might appear is added below. 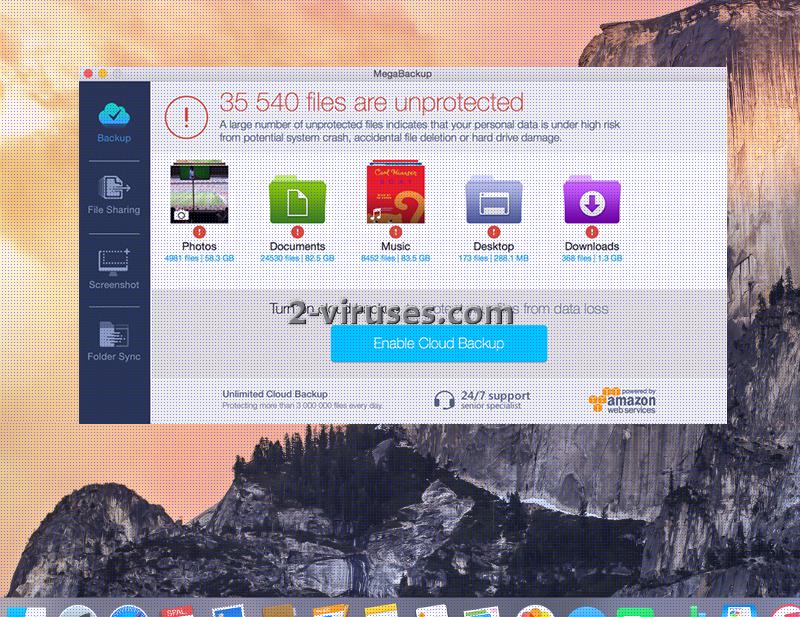 MegaBackup can be seen as a potentially unwanted program (PUP). Why? Well, because it is capable of being installed without the actual knowledge of the user. If you are familiar with parasites at a certain level, then you should know that many of them spread via bundles of programs. One of the prosperous ways of avoiding parasites is to download software from reputable sources. Furthermore, during installation process, always select advanced/custom modes. The recommended basic version will only increase the possibility of being infected with a parasite. If you select the basic option, the program will install other recommended applications as well. We have repeated ourselves: programs, offered to you during installation processes, are not top-notch. Sometimes users are not even aware of the fact that their selected program is installing more than expected. This lack of knowledge happens because of negligence towards Setup Wizards and EULA documents.

Spyhunter or Malwarebytes are the three fighters of malware that you can choose to defend you from harm. They are sophisticated and convenient, so we hope that you will consider trying them out. A manual removal is also a possible course of action (instructions can be found below). This way out is more recommended to those who have managed to remove malware before. If you have not, then it would be easier to choose an anti-malware tool. However, the choice is yours. Furthermore, you should be able to recognize the advantages that come from malware-fighting program.