Incognito Private Shield falls under the category of a PUP (Potentially Unwanted Program). Its authors claim that the program cleans all privacy issues that are on your PC, such as user and password, profile, browser history, IM History, Cookies, local trace files, and other issues. Incognito Private Shield is actually a fake system optimization software, also referred to as a fake privacy optimizer. The majority of issues it reports can be fixed absolutely for free. However, the program additionally presents a lot of intentional false positive detections to make people buy the so-called full or registered version of the software. 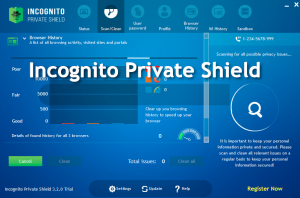 Incognito Private Shield is similar to Privacy Plus, Privacy Keeper and some other programs reporting similar fake privacy issues. The distributors of Incognito Private Shield understand that people most likely will not come to the personal conclusion to install the application through its official page. So they refer to the illegal practice of bundling the installer with other free programs. Hence, it is absolutely correct that the utility is detected by many anti-virus utilities as the one that should be immediately removed. Probably the main factor not to treat Incognito Private Shield as a genuine software is its numerous false positives. The application does not fix real computer problems, such as the damage by real malware or spyware. It is simply not capable of identifying the exact leakages in your system security that could lead to your privacy being compromised. Incognito Private Shield instead reports many fake problems in order to force you into activating its full version. Unfortunately, the registered version of the program is equally primitive, so investing money into it is the total waste of your funds.

Incognito Private Shield essentially disturbs users while running in the system. It is automatically launched as soon as you start your PC. The software immediately runs its fictitious scanning lasting within a very short period of time. Soon the utility gives you a report mentioning invented problems and forcing you to purchase the license for fixing them. While the fake scanning takes place, Incognito Private Shield additionally distracts you with the multitude of pop-up alerts attempting to scare you into buying the licensed version of the program.

Finally, Incognito Private Shield causes your PC to be working in a very slow manner. Your system will be overloaded by the active processes related to the PUP. It uses a lot of system resources and causes high CPU usage that may result in continuous freezing and may lead to system crashes.

The intrusion of Incognito Private Shield occurs without the user’s direct permission. The PUP is included in the setup file of many free programs. Unfortunately, sometimes this information about additional offers is not clearly mentioned during the installation process, or it may be specified in a small print. Users are often reluctant to read all these details carefully, so they tend to blindly agree with all the installation details by click on “Next” or “I agree” buttons.

This is the way Incognito Private Shield infiltrates into many PCs today. Your current security software can also be blamed for the failure to protect your system from Incognito Private Shield unwanted installation. Many anti-viruses today claim to be effective, but often they simply do not perform their protecting function as advertised. You should exercise caution next time whenever you browse the web and especially when installing any free utilities. Incognito Private Shield can be uninstalled directly from the Control Panel, however, we additionally urge you to refer to the help of either Spyhunter to make sure that there are no other traces of malware left in your system.