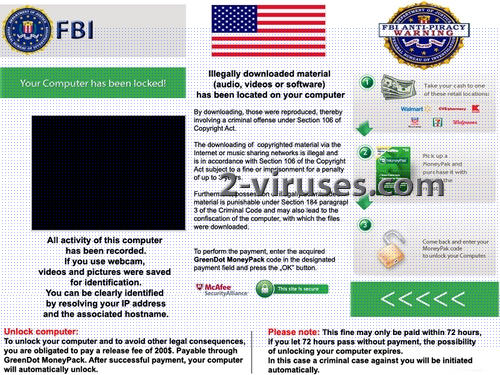 The message of FBI Anti Piracy Warning claims that your PC is blocked due to illegally downloaded material. That MP3’s, Movies, Software, etc. It says that you have to pay a fine of $400 as you broke a law. After that it promises that your computer will be unblocked. Unfortunately, that is not true. It’s just a trick that computer hackers use in order to gain money easily. THat’s how the message looks like originally:

FBI Anti-Piracy Warning
All activity of this computer has been recorded.
If you use a webcam, videos and pictures were saved for future identifications.
Your Computer has been locked!
Illegal downloaded material (MP3′s, Movies or Software) has been located on your computer.
Unlock your computer:
To unlock your computer and yo avoid other legal consequences you are obligated to pay a fine of $400. Payment of the fine is done by GreenDot MoneyPak payment voucher. After payment is made your computer will be unlocked and legal actions will not be taken.
Failure to comply with FBI Anti-Piracy warnings could result in criminal charges and possible imprisonment up to 3 years in country jail.

Note, that legitimate FBI Anti-Piracy warning is included in some movie and other copyrighted works. Such warning just warns about the copyright and does not forces to pay any ransom. The ransomware works differently and demands the payment using pre-paid cards. No government institution would do such thing without court order and not in person.

Do not have any doubts and remove FBI Anti Piracy Warning as soon as you detect it on your system. Since your computer is completely blocked you will have to use a USB stick where you will have to download a reputable anti-spyware program and run a full system scan from it. Also If you can access another user from the infected PC, download Spyhunter on that account, launch it (if you need, run it as infected administrative user). Perform a full scan. This is by far the easiest way to remove FBI Ransomware without any data loss. Another trick is to pull out the network cable while PC is booting and pull it in couple minutes after the startup to download anti-malware programs.