Evrial trojan is extremely dangerous computer virus that can eventually lead you to losing Bitcoins. With cryptocurrencies becoming more and more popular nowadays, various trojan viruses are targeting users to steal their virtual money. We have already seen infections like Bvhost.exe Miner and Deftesrg.exe Miner Trojan targeted to infect computers and use them as bitcoin mining stations behind users backs. In this case, Evrial’s approach is a little bit different – it is not looking to mine bitcoins, it simply seeks to steal them by changing the receiver of bitcoin transaction. 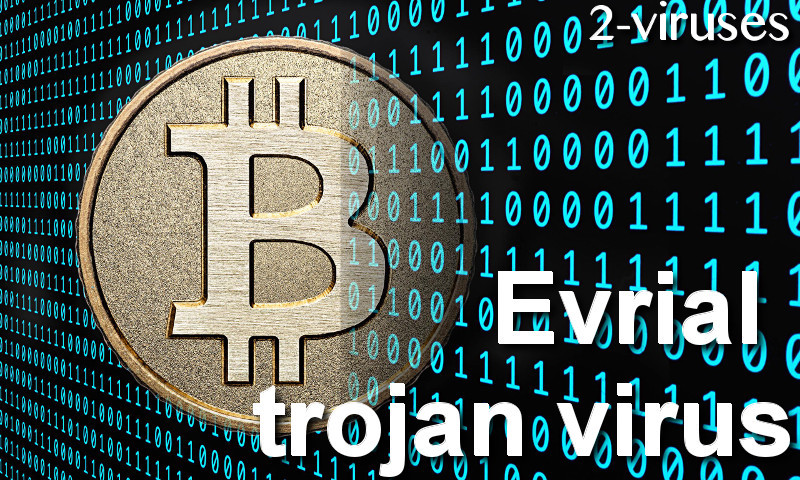 Trojan infections targeted to cryptocurrencies are not a surprise at all, however, it’s still really difficult to tell how they are distributed and what is the best technique to protect your Bitcoin wallet. Cyber security researchers claim that Evrial trojan is distributed using several different methods and no particular tendencies can be applied here. Therefore the best solution is to stick to the basic cyber security rules and act carefully online.

Probably the worst feature about this trojan is that once it is inside, you can’t really do much about it – it is difficult to spot and the loss of the money is almost unavoidable. Moreover, Evrial is capable not only of stealing Bitcoins, but also taking over cookies and other browser credentials.

Evrial available at darknet for as low as $27

The fact that this trojan is distributed in many different ways is based on the marketing applied by creators of this malware. Instead of distributing the malware and infecting computers themselves, they have decided to sell copies of this piece of virus on the darknet, so anyone with a spare 27$ in their pockets can get access to the program, modify and then distribute it themselves. That’s why every case of Evrial infection is different.

The main feature of this trojan is stealing or/and modifying Windows clipboard information. That is the trick how it is capable of stealing bitcoins – once someone copies the address of the wallet they want to send money to, Evrial modifies the code and inserts address of the cyber criminal behind this malware. It can be extremely difficult to notice, since those addresses are really complex and no one bothers to memorise them.

There are several possible solutions to protect your computer from Evrial trojan. First of all, if you have a suspect that this virus is operating on your computer, refrain from making bitcoin payments for a while. It can’t steal money from you if you do not make any transactions, so before making one, please scan your computer with SpyHunter Either one of those programs are really effective in detecting and removing trojan infections, thus Evrial should be spotted and eliminated in no time.

Moreover, always double-check the address of the receiver. Don’t just copy and paste it without making sure that it is the same address and it has not been modified by trojan like Evrial. Lastly, even though this trojan is only affecting Bitcoins right now, it is absolutely possible that Evrial will be trying to steal other coins in the nearest future too.