Disk Optimizer Pro was developed by Xportsoft Technologies. The program says it can defrag free space and fragmented files, prevent further fragmentation, find large files and delete unwanted data and so on. Seems like a useful application, however, it doesn’t really perform any of these functions really well. What is more, it asks paying $79.99 for its services which is a crazy amount of money for a system optimizer that will hardly even improve your system’s performance. 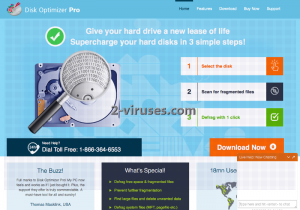 Disk Optimizer Pro is also very annoying as it constantly runs system scans and tries to convince you into purchasing its full version and fixing all errors that it finds. Beware that it is just a trick to swindle your money away. It rarely detect existing problems and, most of the times, it only lists some old registry entries and suggests removing them. Even if you remove them, it won’t change your system’s work much.

It is strongly recommended to remove Disk Optimizer Pro from your system and forget about it. This is not a program worth your trust, so get rid of it as soon as possible.

Disk Optimizer Pro has its official website (diskoptimizerpro(dot)com) and it can be downloaded from there. However, usually it is installed as a bundle along various freeware, like media players, PDF creators, download managers and so on. To avoid its installation, you have to be more careful with the installation steps of these free programs. Disk Optimizer Pro often comes preselected to be installed by default. So if you do not deselect this option, it will not ask for your authorization to be added.

Never agree to add any unknown programs to your system. If you have already detected it, remove Disk Optimizer Pro as soon as possible. Download a reliable anti-malware tool and run a full system scan with it.