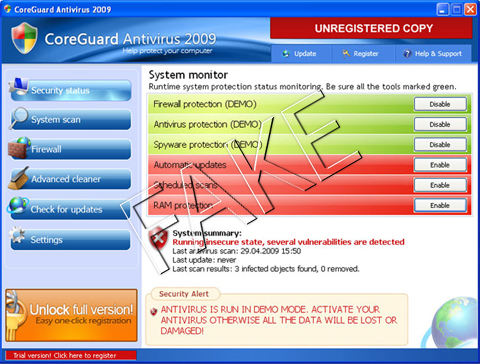 CoreGuard Antivirus 2009 is configured to start automatically whenever user logs into Windows. CoreGuard runs fake system scan and reports various security threats and privacy issues that can not be removed with unregistered version, so user is strongly advertised to purchase the program. CoreGuardAntivirus2009 will also flood the system with annoying alerts and pop-up windows, though, all those issues are fake and should be ignored. Here’s an example of a fake CoreGuard Antivirus 2009 alert:

“ANGEROUS! ANTIVIRUS DETECTED SOME HARMFUL PROGRAMS ON YOUR PC! THEY MAY CORRUPT YOUR INFORMATION OR SEND IT TO HACKERS.”

If you suspect that your computer is already infected, please use manual removal guide shown below to remove CoreGuard Antivirus 2009 from the system.