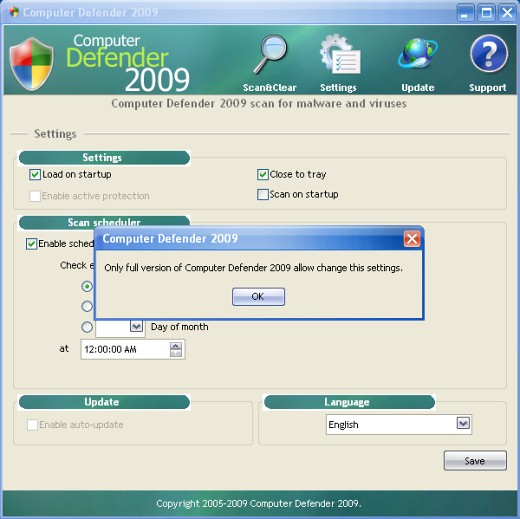 Computer Defender 2009 is a new deceptive anti-virus program which uses old malicious methods to get into the computer system and make the unsuspecting computer user pay his money for the commercial version of this program. ComputerDefender2009, just like its initials SmartDefender PRO or AV Antispyware, successfully makes people believe that their PCs are heavily infected by different Trojans, worms and other malware and that a new anti-malware is urgently needed. In truth, all these statements are scam. This rogue anti-spyware is a parasite which must be removed immediately because it may damage the PC system heavily and steal personal information of a user.
Computer Defender 2009 trialware installs itself to the computer system after Trojans, connected to this parasite, find some security vulnerabilities. Just like other malicious security tools, this one acts similarly and starts loading fake system scans. It exhibits annoying pop-up ads about tones of cyber-threats found and declares that the PC is in danger. Computer Defender 2009 also promotes the “full” its version which is declared to cure the PC system easily but in truth it is just another useless security application. Get rid of all the files, connected to Computer Defender 2009 and use reputable anti-spyware to guarantee that other malware will not be installed to your PC secretly.