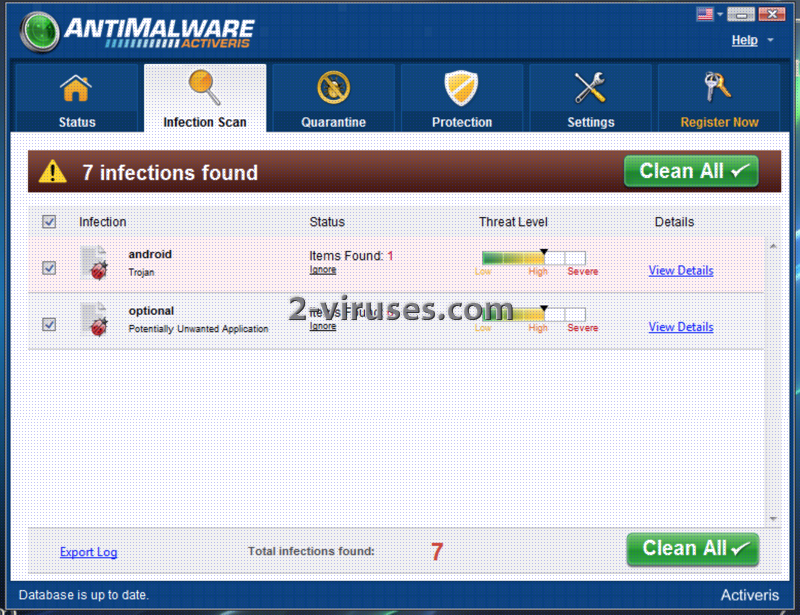 Activeris Antimalware is a little known commercial anti-malware application that is distributed by scammers. Although this software does not detect false positives, it is installed together with other programs that are detected by Activeris scan. This is a very bad practice and this anti-malware might be considered Rogue Antivirus. At the moment we rate it as PUP. There are plenty of similar programs that should be beneficial, but in reality only seeks to make money by displaying ads or collecting information about users.

The free version of Activeris AntiMalware should not display popups or alerts itself, as it is a scanner only (it does not provide any protection function and stops working when its window is closed).

Activeris Anti-Malware is distributed together with such software like Feven, MediaEnhance and other adware using Trojans. For example, we have seen this rogue downloaded by software pretending to be JAVA installer (which fails to install Java at the end). All of this is done to earn some money by promoting adware and crappy anti-malware solutions.

Activeris AntiMalware is a commercial program, that is, it won’t remove anything it detects without a payment. However, it is of a quite poor quality and thus has to rely on bad partners for promotion at the moment. The program is signed by Fiorentino Media LLC,  which is not a known system utility developer but rather a marketing company. Additionally Activeris focuses more on distributing their registry cleaner (FastAgain PC Booster) than antimalware.

We recommend removing Activeris AntiMalware for now and scanning PC with spyhunter, malwarebytes for related infections.