Scammers are attempting to pull off a new hoax, targeting phone devices by Apple. A series of new attacks have been spotted and we are warning people to be cautious while surfing the World Wide Web via the mobile version of Safari. As a response to such deceptive strategies, Apple encourages its user community to update phones to the most recent version, 10.3. In order to keep your iPhone secure, you should not visit unreliable websites and bypass online advertisements that are frequently out for blood.

The Mobile Safari was the program that hackers intended to influence by misusing JavaScript pop-ups. The core of this attack is not to encode photos, music or videos that a person might have stored in his/her iPhone, but to simply prevent user from exiting Mobile Safari application, which will display severe accusations for indecent activity online. If a victim refuses to abide by the rules that the scammers indicate, the consequences are not pretty. Well, at least according to the devious rogues themselves. Since the pop-up blames users for viewing pornography and visiting adult-oriented websites, the victim will supposedly be reported to Metropolitan Police for his/her improper actions. Of course, these are just empty threats as scammers would risk exposing themselves. 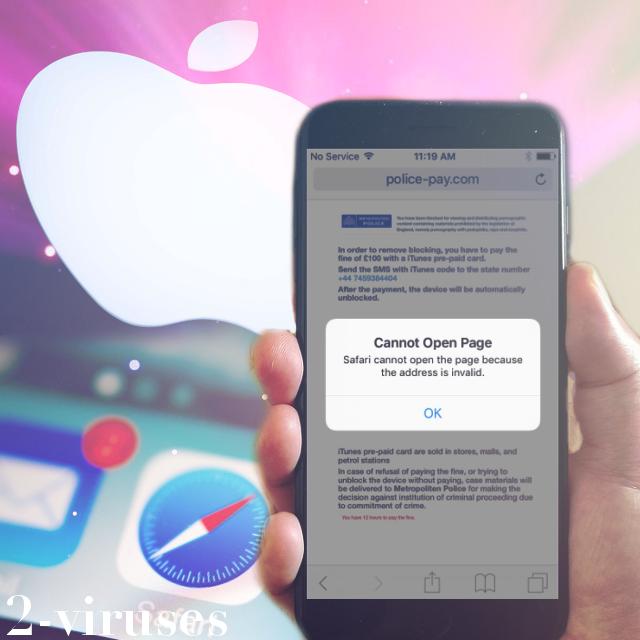 Victims encountered this scam while visiting domains, when suddenly, the screen changed and started to feature a frightening message, together with a small window. The table indicated that “Safari cannot open the page because the address is invalid”. Presumably, after users click “OK” they should regain access to their browser. However, the table does not disappear no matter how many times the “OK” button is pressed. Surprisingly, scammers require a ransom in form of iTunes gift cards which is rather unusual.

A solution is rather simple

This scammers’ attack was detected approximately a moth ago and Apple became aware of this vulnerability about the same time as well. Naturally, for its new update, it addressed this issue and made some significant modifications to Mobile Safari. Now, pop-up messages are dealt differently. How? Well, instead of expanding through the whole browser, pop-ups will be limited and displayed per-tab.

In addition to that, people might have been too frightened to be rational: some of them might have paid the required sum. What they do not know is the fact that since this mobile ransomware did not encrypt files or make significant changes to a device, it was enough to delete browsers’ cache. The new iOS update (10.3) allows victims of similar attacks to escape a lock-screen much easier. Since pop-ups won’t occupy a whole browser, it won’t be locked. User can easily exit the malicious tab. For people that are not running Safari on the most recent version, deleting cache is the solution. You can reset it through the following steps: Settings-Safari-Clear History and Website Data.