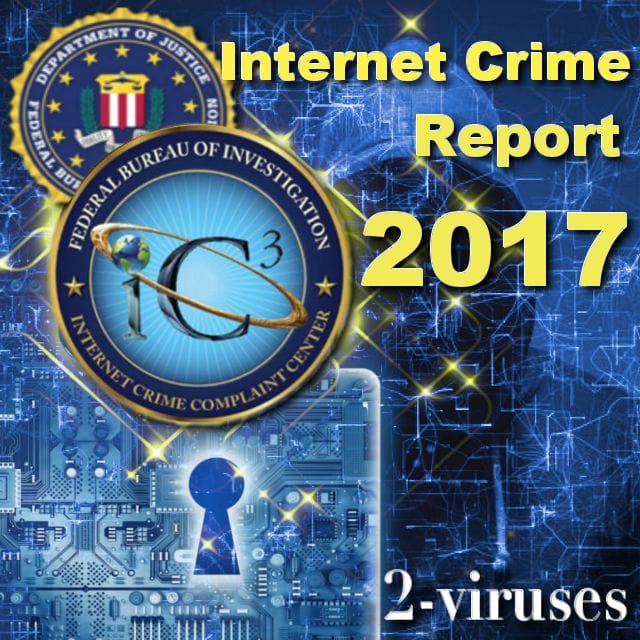 Since the beginning of its establishment in 2000 Internet Crime Centre received more than 4 million victim complains (it hit 4 million milestone on October 12, 2017) about various internet frauds, scams and other cyber threats. Regardless the increasing cyber crime rate, report presents that it actually slowed down since last couple years (the current numbers are very much like in 2016 with $1.3 billion loss and almost 300k complaints) and some malicious activities even decreased significantly, like ransomware threats. This could be due to a greater promotion of internet crime awareness making people practice safe web browsing and encouraging to report any suspected malicious activity.

No surprise that over 676 million dollars were lost due to the business email and email account compromising (BEC/AEC) crimes, yet the eyebrow-raising number of  $211 million loss was from confidence fraud and romance. It seems like in 2017 online ‘catfishes’ have reached their activity peek targeting lonely souls and their bank accounts. Third place went to Non-payment and non-delivery resulting in 141 million dollars transferred to cyber crooks.

It’s all about safety

When the numbers of internet users are growing everyday IC3 tries to stay on top and spreads the knowledge to new or unsuspecting online surfers though media. Cyber security professionals agree, that just like in medicine: Prevention is better than cure. With a little bit of caution and basic safety knowledge can safe you a lot of money and nerves avoiding hackers’ traps.

We want to encourage everyone who suspects they have been victimized by online fraudsters to report it to us. The more data we have, the more effective we can be in raising public awareness, reducing the number of victims who fall prey to these schemes, and increasing the number of criminals who are identified and brought to justice.

If you have noticed a malicious online activity or became a victim of any kind of cyber crime, you can report it to the FBI via IC3 website www.ic3.gov.