A classic Robin Hood situation: do righteous intentions counterbalance the fact that their implementation involves activity outside the law? The dark web is an encrypted network, accessible only via Tor. Many of such websites that are found on the dark web are pursuing criminal activity or exchanging rogue material. Content that is banned from legitimate websites blossoms in this shady environment, a perfect place for hackers to thrive. In the past two days, a surprising news exploded on the Internet: over 10,000 websites from the dark web had been hacked by a mysterious persona. The reason behind this hack was identified to be the fact that many of the hacked websites propagated child-pornography or engaged in other criminal activities. The notorious Anonymous group was said to be the ones that initiated this attack against the dark web. A Tor web-hosting service called Freedom Hosting II was the one that Anonymous targeted, since majority of dark web websites are functional thanks to this host.

One hacker from Anonymous initiated this attack and decided to check out the websites that are running on Freedom Hosting II. After a great deal of compromising information was gathered, the invader asked for 200 dollars as a ransom to return the discovery to the hosting-service owners. Generously, they send 2 BTC to the hacker, but he/she still felt the need to share the spicy info with the world. 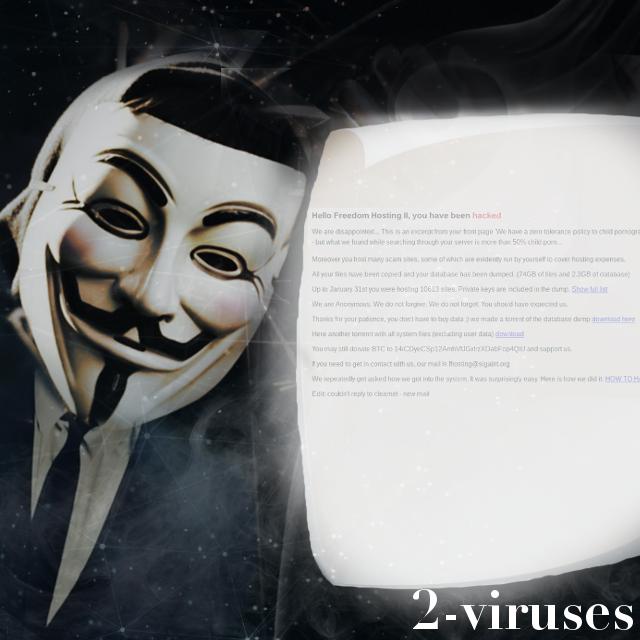 Back in 2011, Anonymous had initiated an Operation Darknet, which was focused on fighting child-pornography one the dark web. The group still sticks with its beliefs and refuses to accept that offensive material is so easily reachable via the dark web. Even if this place supports shady dealings and allows RaaS to be promoted, children should not be incorporated into these schemes. Since many websites from the dark web seemed to broke the rules and distributed child-pornography, Anonymous decided to make them pay. Freedom Hosting was discovered to support a bunch of offensive websites that are completely inappropriate, either offering child-pornography like candy or engaging it scams, fraud or other criminal activity. During this operation against vile content, Anonymous also exposed almost 400,000 email details. This major reveal can definitely end an era of some molesters and creepy individuals, since they might face jail bars for distributing child-pornography.

Even though this invasion was implemented by hackers, it is a good news that websites, featuring child-pornography were closed. However, this achievement is not the last one: battle against offensive content has been around for many years. It is difficult to predict the future, but we sure hope that this is not the last time that Anonymous crashes the party and ruins it.